From Imposter to Entrepreneur: How One Mom Went from Scared to Success by Ditching Her Doubt

We are so delighted to give a platform to this summer to some of our favourite WAHMs! This week we’re putting the spotlight on Rebecca Brunke, a nanny and Mom turned maker with an Etsy shop turned virtual assistant. She’s sharing her journey that included the oh-so-popular imposter syndrome and her rise against it to overcome and build up a business, Balance Books + Marketing, that works not just for her family lifestyle, but for her.

You have dreams that you want to follow, but you’re not good enough. You’re not smart enough, you should have started a year ago, others are already doing it better than you, so don’t even try. These are the things that the evil Imposter Syndrome can whisper (sometimes yell) into our ears.

Women, specifically, are often put into roles and feel like we need to juggle everything – babies, Pinterest worthy birthday parties, clean and pretty houses, put together outfits and hair, super healthy lunches packed in tidy backpacks, while also crushing our dreams. It’s so easy to push our dreams into the background though, while we take care of everything and everyone else first.

It’s hard to be brave enough to take that first step when you are questioning everything when you are just getting started and may not know the ins and outs of everything. When you look around it seems like EVERYONE else is rocking their dream jobs (or at least rocking something) and you are full of self doubt.

This is such a common feeling. So common that even people like Maya Angelou and Albert Einstein suffered from it. It’s called Imposter Syndrome.

One day when I was in my daughters jujitsu class a new kid said he “sucked, because he was just a white belt”. The coach explained to the whole class the concept that you cannot compare yourself to others: you have to be in your first white belt class before you can get to your black belt. A lesson that was meant for children was exactly what I needed to hear to get myself motivated to take action.

My dream was to build a career while working from home so I could be home with my kids. This felt impossible and filled me with doubt, especially when others around me expressed the same doubt. I learned quickly that the first step to getting over the Imposter Syndrome I was experiencing was to talk about how I felt, because when I did, I very quickly learned I was not alone. So many of my friends have dreams but don’t feel good enough/ ready enough/ smart enough to get started. I recently listened to a podcast by Emily Gough where she explains why done is better than perfect. It really resonated with me. I had been stressing over everything I needed to do to get to my dream, instead of thinking about the next small step.

The second step for me was to ignore the negative voices from others and myself, and focus on the positive. Honestly, compliments help! When I was running an etsy shop, even though I was selling lots of items, it never felt like enough. I was looking to a much bigger company (who had two people working full time, by the way) who I thought were rocking it, which then in turn meant I wasn’t. Sitting behind the screen or the sewing machine, it was easy to let the feelings of “not good enough” creep in. But when I got messages from customers saying how much they love my items, or how I had inspired them to get started – that is when I felt like I’d made it.

People were looking to me like I had been looking at the bigger company. I realized in this moment that yes, people were ahead of me, but that I was ahead of others. And that’s something. I had taken the steps and was doing what I loved. Success happens slowly.

When I was ready to move on, my next big dream was to be a Virtual Assistant, but honestly, who actually gets paid to do that? Instead of following that dream, I started doing Bookkeeping from home. I had a couple clients but I wasn’t feeling super confident or happy it. I was working from home though, and wasn’t that close enough to what I really wanted, right? Not really. In fact, I had a good friend call me out on it. She pointed out that I had all the qualifications to do what I actually wanted, but it would actually require putting myself out there. I kept thinking ‘What if no one wanted me to work with them? What if I messed up? What if they asked me to do something, but I didn’t know how to do it?’

I didn’t feel good enough or ready enough. But you know what? I jumped. And, by jumped, I mean I opened a social media account saying what I do and that I’m accepting clients. And then I panicked and called a friend to talk me down. I turned my phone off and ignored the step I had taken. What happened next? I got my first client. And then another. And that client liked me so much she told a friend, who also became a client, and then she told another. Did they ask me to do things I wasn’t sure how to do? Sure, but that’s what Google is for! They also let me know that I’m doing a great job, and honestly, I believe them. I’m rocking it. Now, when someone asks me what I do, I say “I’m a Virtual Assistant” and not feel like I need to back that up with “well, kind of, I stay home with my kids and do some bookkeeping and have an Etsy shop and just try to stay busy I guess….”

In the name of my idol, Glennon Doyle, You can do hard things! So take a deep breath, and take that first step. You’ve got this.

“There is freedom waiting for you, On the breezes of the sky, And you ask “What if I fall?” Oh but my darling, What if you fly?” — Erin Hanson

Are you curious to know how a Virtual Assistant can help you take that next jump in your business? Connect with Rebecca on Instagram! We’ve got to tell you though, her client roster built up so fast she hasn’t had much of a chance to actually set out her own social media strategy! Send her a message there and she will be happy to share with you how she focuses on her client’s business so they can focus on their clients! 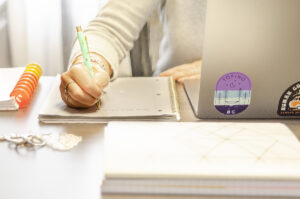 The D+D Team and I believe that every entrepreneur and mom boss should be able to leverage their social media without the overwhelm. For the past 2+ years, D+D has been helping women entrepreneurs discover their brand voice, own their messages, and post where it’ll make the biggest impact.